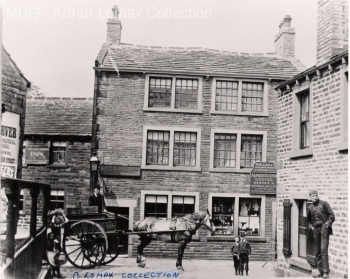 The property is believed to have been built as a home for two Dutch brothers before being converted into an inn. There is a 1762 date stone on the 'village green' near to the site of the old church with two tulips carved on it which it was reported by the foreman involved in the demolition of the building came from the pub when it was demolished in 1968. However the date stone over the door of the pub was 1745 so we have a mystery. It was converted into an inn at the beginning of the 1800s.

The Two Dutchmen is well known in Marsden's history as being the home of the last person condemned to spend time in the stocks which were originally sited on the corner of Church Lane and Towngate. On the evening of 11th November, 1820, Harry Broadbent, husband of the licensee, had spent some time celebrating the birth of his son when he heard the foundry and mill bells clanging. They were being rung to mark Queen Caroline's success in preventing her husband George IVth from divorcing her. It was reported that 'Harry determined to share in the rejoicings' and, having gained access to the church 'he seized the dangling rope' and rang the bell for a full five minutes. He was taken to court and found guilty of being drunk and disorderly. He refused to pay the fine and was sentenced to spend six hours in the stocks. 'Harry was treated as a martyr and a hero and Marsden held high holiday while Harry was liberally supplied with food and drink. When the term of his incarceration had expired Harry was carried in a chair on the shoulders of his friends in triumph.'

The stocks were renovated and remain in Towngate as a source of amusement for children to enjoy.

The Two Dutchmen was one of the Marsden pubs bought at auction by John France in 1888. In 1868 he started an extensive brewery at Higher Green Owlers and, later moved to Hey Green. At his death in 1893 he owned ten public houses.