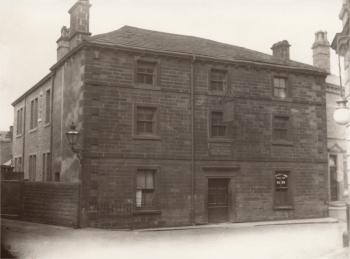 The Red Lion was built around 1740 The 1765 will of John Kaye, innkeeper of Bridge End, left all his property to his son, Joseph. The inventory of his possessions show that the inn had 8 bed frames, 36 chairs, 15 tables, one lead, one cooler, brewing vessels and barrels and a stock of ale and liquors. John Kaye obviously had an interest in increasing his trade. He had invested £200 in the first Marsden Turnpike road which passed through Market Place.

In 1803 John Kaye was followed as the licensee by a gentleman with the distinguished name of Humphrey Davenport. Davenports were also associated with the New Inn and the British Queen on Manchester Road.

In 1838 The Red Lion was described as being a substantial property covering a quarter of an acre with stables and outbuildings occupying the land behind the inn. Objections were made in 1911 because the frontage projected too far into the street and a proposal was made to demolish the whole building. A compromise was reached whereby just the frontage was replaced by the present one which is recessed so as to line up with the buildings on either side and to provide a forecourt and pavement.

In 1931 the pub applied for planning permission to install water closets, the patrons no doubt felt that this was not before time. Bentley and Shaw's brewery acquired the property in or around 1911. The inn closed in 1968 and the building has been converted into flats and offices.