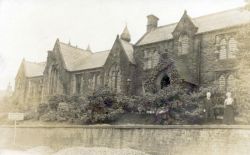 Alfred Hirst and his wife outside the National School

The National School opened at Whitsuntide, 1856 'amid great rejoicing and the inevitable meat tea at the Old Ram Inn'. It had been built for £2000 which was raised by the Church through voluntary contributions and grants to house 435 children. The first head was Richard Bamford who had transferred from the Church School. On his retirement in 1880 his son-in-law, Alfred Hirst was appointed and remained in post for forty years. His long service was rewarded by the presentation of a gold watch chain by his old scholars and friends.

He was succeeded by Harry Whitehead who was head from 1920 to 1949 when an already serving teacher, Thomas Carr, became head and remained so until the school closed in September 1960. The administration of the school has transferred from the Church to the WRCC in 1902. The building was demolished in 1967.

"Up to the year 1870 elementary education in this country was left almost entirely to private enterprise or to such institutions as the Marsden Town School and Meeke and Walkers institute founded by private beneficence. The Colne Valley was not quick to avail itself of the provisions of the great Charter of Popular Education. The Slaithwaite and Linthwaite School Boards were not formed until 1893 and Marsden has, even to this day, proudly disdained to adopt the act, though, as we have seen, it has not lagged behind its sister communities in the provision of elementary education." (Parish Magazine. 1910)

The first Church Day School opened in Back Lane (now called Church Lane) in 1829 with a staff of two. It was financed by public subscription and a £100 grant from the National Society. The first headmaster is not known. The second was Thomas Lawford who took over in 1834. He was followed by Mr. Taylor in 1840. Richard Bamford who came from Lingards took over in 1845.

Between the years 1854 - 1857 the vicar, Rev. David James, raised sufficient money for the building of a new school in Manchester Road, near to the bottom of Old Mount Road. Richard Bamford became the head master of the new National School when it opened in 1856 and remained in post until ill health forced his retirement in 1880.

The senior children were transferred to the National School whilst the younger ones remained in the old school which was to carry on as the Church Infant School. It eventually closed on 31.08.1910 and was demolished as the premises had been condemned. The site is now occupied by the lychgate. The scholars of this school were transferred to the Town School which is now the Marsden Infant and Nursery School in Brougham Road.

The school log book quoted an attender at the opening who said "When I beheld the beautiful exterior of the building I was unprepared for its noble magnificence within, almost reminding me of Westminster Hall".

The building was extended in 1892 by the addition of two new classrooms, a new porch and cloakroom and kitchen at a cost of £846.15s.0d. There continued to be extensions and improvements over the next decade. For example in 1898 the following was entered in the Parish Magazine for January, 1898
"The raising of the roofs and re-erection of the bell tower which will no longer threaten to flatten out our teachers and scholars, will add to the general feeling of comfort and security".

Throughout the history of the school, until 1902, when the school became administered by the West Riding County Council, the school was dependent on voluntary contributions and small amounts of grant aid. The September 1899 edition of the Parish Magazine noted,
"The demands of the Education Department are practically unlimited, our funds are not so. We are restricted in this parish to voluntary offerings of the working classes only, to whom we have anxiously looked and have seldom looked in vain. The mill owners, advocating as they do in Marsden undenominational teaching, support their own schools". The Education Department laid great stress on voluntary contributions and stated in the February, 1899 edition of the Parish Magazine,
"The next year's Special Aid Grant will be forfeited unless greater efforts are made to increase voluntary gifts".
The grants depended mainly on the average attendance of scholars, therefore, if school attendance figures were down, the school funds suffered. The school log books between 1893 and 1910 contain reasons for non attendance and the shortage of money for basic essentials.

The school suffered from an insufficiency of income, not only for equipment but also for repairs which resulted in the building falling into a serious state of disrepair. When the school was taken over by the West Riding County Council a Statement of Requirements was issued detailing building repairs which must receive attention. These included re-pointing, repairs to roof, spouting, fall pipes, sett-paving, boundary fencing, and coal house, re-routing of drainage channels so that they did not go under the classroom or the Schoolroom, repainting both inside and out, damp proofing walls of classroom and upstairs room and improvements in ventilation and lighting.

Both the boys' cloakroom and the girls' needed extensive repairs to the defective wooden divisions of the boys' urinals, lavatory basins and floors. It was also required that the ash pit door should be kept locked and additional or improved cloakroom accommodation must be provided for both boys and girls. The school used by the infants was in a similar state of disrepair which appeared to lack a urinal "constructed on sanitary lines" or an ash pit. It was also demanded that "steps be taken to prevent the bad smell arising from the stove".

There was a conflict of interests in the church, on the one hand money raised was needed for the maintenance of the two schools whilst there was also a strong desire to build a tower on the church itself. The Parish Magazine which listed all the repairs and alterations that had to be done to the two schools also aired this problem. The article stated
"We all want to see our Tower built, but if we lose our Schools we shall lose our congregation, as we shall lose the children, who are to be the Churchmen and Church-women of the coming generation. It is surely our duty to build up the 'living stones' before we do the material ones."

The Church raised money in a variety of ways other than collections during services and donations in general. There was a Penny Association, sales of work and the National School was rented out for socials, entertainments and meetings. The Managers were perturbed by the indiscriminate use of the National School building and issued regulations regarding the conduct of users which insisted that written consent had to be obtained from the Managers and shown to the caretaker on demand. Smoking was restricted to the porch or a designated classroom, an approved adult had to be present and all damage had to be paid for. The scale of charges varied. Meetings directly connected with Church work paid 2s.6d for the large room, 1 s.0d for the large classroom, 6d for the small classroom and 4s.0d for the whole school. Meetings not directly connected with the Church paid half as much again whilst meetings having no connection with the Church paid double.

There were only four headmasters, After Richard Bamford retired in 1880 his son in-law, Alfred Hirst was appointed and remained in post for forty years. He was succeeded by Harry Whitehead who was headmaster from 1920 to 1949. On his retirement, a serving teacher, Thomas Carr, became headmaster and remained so until the school closed in September, 1960 when he transferred to what had become the Junior School in Manchester Road. This school had been built in 1910 as a Council School. Pupils transferred either to Colne Valley High School or to the Junior School.

The site of the National School is now occupied by a joiner's shop and wood-yard. All that remains of the school are the school gates and the steps leading up to the front door.

Based on a study by Allan Matthews.

January 9 1893 Attendance 138 out of 357. Heavy snowfall. Many children have long distance to walk to school.

February 13th 1893 - Children absent from school as a consequence of smallpox at new waterworks.

March 16th 1894 - Tunnel workmen leaving taking their children with them.

April 22nd 1894 - Low attendance due to epidemic of measles.