An early reference to Summer celebration in Marsden is in 1691 from the diary of Rev Robert Meeke of Slaithwaite.

'Aug 30th I preached at home there was a slender congregation. Many went to Meltham, Marsden and Ripponden, being the first Sunday after their Rush-bearings.' (Corrected from p.43 of extracts published by Kessinger Publishing's Legacy Reprints)

In the Middle Ages rushes were commonly used to cover the earth floor of churches. This was carried out every year covering the floor of the church with fresh rushes to prepare for the cold of winter. The event was a general holiday, and the following Sunday was carefully observed. E. Irene Pearson, in Marsden through the Ages (1984) suggests that the change in the dedication of Marsden chapel from St. Mary to St. Bartholomew may have arisen from the custom of holding the Rush Bearing on St. Bartholomew‘s Day, which was August 24th.

As churches began to have stone floors (or even heating) rushes were no longer needed and the ceremony died out; but it seems that, in some places, attempts were made to revive rush-bearing during the 19th Century. 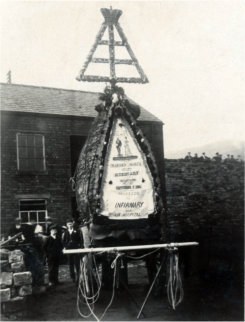 A reference from 18541 places the 'Marsden Wakes' in the first weekend in September with a church service on Sunday and more secular events taking place on the Monday. This included two rushcarts, one built in Binn and one in Dean, both being paraded around the village drawn by youths 'bedecked with ribbons'. The Binn rushcart was accompanied by 'a drummer and fifer of venerable appearance' while the Dean rushcart, which was judged to be the better of the two, was preceded by a band. A gala was also held in a field next the British Queen Inn (now Ingfield House, on the corner of Peel Street and Manchester Road).

This seems to have been a success because the following year another rushcart was constructed which - 'for three days ... was dragged backwards and forwards, and the sum of £14 was collected by the proprietors2'. Unfortunately, after expenses, the 'shareholders' received only 5 pence each resulting in a brawl at a later meeting; followed by more fighting in the village on the following Monday evening which had to be broken up by a constable.

The Huddersfield Chronicle and West Yorkshire Advertiser refers to two more rushcarts in 1861 and 1880; the former being 'regarded as out of date' while the latter is described as an attempted'revival of the old custom of rushbearing'.

And in 18923, 'On Saturday afternoon a rush cart, drawn by a party of dancers, paraded the streets and thoroughfares for two or three hours. It started from the Old Ram Inn, and proceeded through Church-street via Station-road, the Junction, and round the Tunnel End to Inner Hey, where it was exhibited on Monday, after which it was destroyed, and the rushes sold to a native for 12s'. 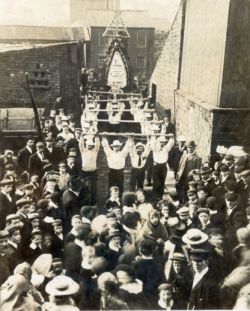 Breaking up of Marsden Old Feast, with rushcart used at St Bartholomew's Church, 1903

The 1903 Marsden Wakes were particularly memorable as the focus of a confrontation between Marsden mill masters and their employees about the timing of their annual holidays. The employers had this year changed the date to August, in line with the rest of the Colne Valley feasts, and the workers wanted, in addition, two days holiday on 7th and 8th September, at the traditional time of Marsden Feast, and to revert to the usual September feast days in subsequent years. These demands, formulated at a public meeting in the Mechanics Hall where 500-600 people attended, were turned down by the masters when a delegation met them at the offices of Messrs. Crowther, Bruce & Co., New Mills.

'Feast Sunday' was held in enthusiastic fashion, with a fairground and many visitors from other villages. Notices appeared around the village and a 6.00am Monday meeting was well attended, 'There was no agenda, no reading of minutes, no chairman - simply a shout of “Those in favour o’ two days halladay,” and instantly a swarm of hands went up into the air, to the accompaniment of deafening shouts. It was practically the same elsewhere, and no work was done in Marsden on Monday'.

Several thousand people, from Marsden and beyond, lined the streets to see the Mossley Morris Dancers dance their way from the Old Ram Inn to Pinder's Yard to meet the rushcart which was, ' an imposing spectacle.

About two tons of rushes had been used for the object, and considerable time and labour must have been given to the process of building. The rushes were born upon a newly painted cart, and were tastefully decorated with garlands of flowers and heather, surmounted by some strange device and a crown. Perched on the top of the rushes were two men, one decked up as a Chairman, and looking exceedingly comical. The horse was gaily decorated with ribbons, and in front were about fourteen or sixteen “local gentry” attired in white shirts, white hats and navy blue trousers with red stripes, pulling at long poles to which ropes were attached.4'

The 'local gentry' , followed by the crowd, pulled the rushcart through the village stopping conveniently by several public houses to take refreshment. Others moved among the crowd collecting for the Huddersfield Infirmary and Manchester Eye Hospital. Festivities continued until late and on into Tuesday, when the rushcart was taken as far as Huddersfield returning through Milnsbridge and Slaithwaite.

On Wednesday the masters of all four mills - Crowther, Bruce & Co., Fisher, Firth, & Co, Robinson Brothers, and John Edward Crowther - closed the mills for the rest of the week - it is likely that no pay was granted for that week - and gave notice that holidays in future would be in August.