Major Ivan Hirst was born in Saddleworth in 1916 to a family who owned an Olham business making clocks, watches and optical components. He is credited as being almost single-handedly responsible for the revival of Volkswagen after the end of World War Two.

By the end of the war Hirst was a Captain in the Royal Electrical and Mechanical Engineers given the task of scrapping the Volkswagen factory in the German town of Wolfsburg. Far from being the bombed-out ruin he expected, Hirst discovered that much of the plant was still intact and he quickly realised that the factory could be saved and used to produce cars for the British army.

A prototype Beetle was found among the debris and Hirst had it painted green and sent to the Army HQ in Bielefield who quickly responded with an order for 20,000 cars. The factory went into production and, by March 1946, had produced its 1000th car.

By 1949, the factory had produced over 50,000 Beetles and was signed over to the German Government. Although Hirst was modest about his role in reviving Volkswagen his colleagues at the Wolfsburg factory felt differently. They presented him with a scale model of the Beetle and named the road leading to the factory after him.

Hirst left the army soon after with the rank of Major and joined the OECD in Paris. He retired in 1975 and settled with his wife in Marsden. He died in March 2000 at the age of 84. 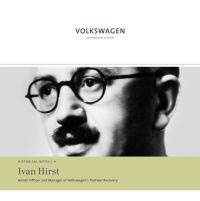